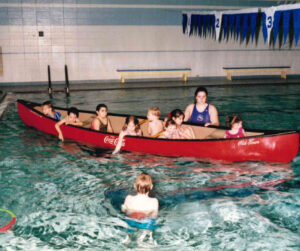 “I learned to swim at the Club” is a statement many current staff and Club members would be surprised to hear, since the Boys & Girls Club of Greater Lowell does not have a pool – or so it may seem. Tucked in the back of the building (one of the many surprises that you can’t see from Middlesex Street) is a regulation sized, indoor swimming pool. Many Club members did learn to swim in this pool in the 70s, 80s and 90s, and local groups rented the pool as well for lessons and swim meets.

Director of Operations, JuanCarlos Rivera, recalls a humorous story from the time when he was a young man swimming at the Club pool. “Behind the check-in desk were a bunch of swim suits hanging up. Some were blue and others were red, which designated what level of swimmer you were. The staff would ask if you needed a suit, and if you said yes, they’d take it off the rack and dip it into a vat of sanitizer and hand it to you…I learned quickly to bring my own suit.”

In 2008, a drain regulation forced the Club to close the pool temporarily while the Board of Directors figured out how to proceed. The cost to update the drain was prohibitive at the time, and would have led to other costly updates, so the Board determined the best thing to do was keep the pool closed. When Executive Director Joe Hungler joined the team in 2010, coming from a background in Clubs with active pools, he conducted a needs assessment in hopes of garnering support to re-open the pool. 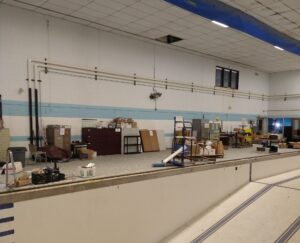 Instead what he learned was that it cost around $100,000 per year just to maintain the pool. Additionally, new concerns around locker room safety complicated staffing and monitoring these spaces. He also learned that Boys & Girls Club of Greater Lowell’s members only used the pool about 3 hours each week, meaning that the bulk of the time the pool was open, it was being used by rental groups. The expenses that were put into the pool could be better spent hiring staff to lead programs and provide support services to the Club’s own members, Joe noted.

So, the pool remained closed. Filling in the pool to create a usable space remained cost prohibitive, so instead, it became a de-facto storage space. For years, staff wistfully dreamt of a time when the space could be reinvigorated and allow the Club to serve more youth.

With the Believe & Become campaign, the time has come to breathe new life into the former pool. The next phase for the old pool is to become the Club’s Community Center and Café, filling a huge need at our Middlesex Street facility. In 2012, our Club began serving dinner each evening to all Club members for free. A small kitchen was outfitted with just enough equipment for Sally Thayer, the Club’s Nutrition Manager, to cook and serve meals. The dining room, or Café, as it is known, has lived in a few different spaces, none of which are big enough to accommodate all members who wish to eat at the Club. 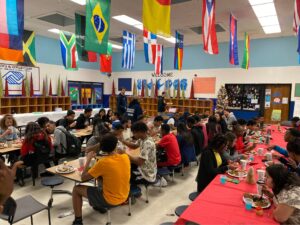 Currently, members eat in shifts quickly in order to make space for the next group. Even with this, Sally has established a family feel to meal time, with members, staff and volunteers sitting together and chatting throughout the meal, sharing highlights of the day and plans for tomorrow.

The new Community Center and Café will not only allow space for a larger, more efficient kitchen, there will be room for 450-500 people to eat at one time. Additionally, when not in use for meals, the space can function as a multi-purpose space for programming, or for Club-wide events – which currently must take place in the gym which is less than ideal for maintaining the gym floor. An exciting bonus is that outside community groups will be able to access the Community Center and Café for their events, workshops, gatherings and more for a low fee – offering one of the largest gathering spaces on this side of Lowell.

To see real-time images of the renovation of the former pool, click here.

Stay in the loop with
Boys and Girls Club